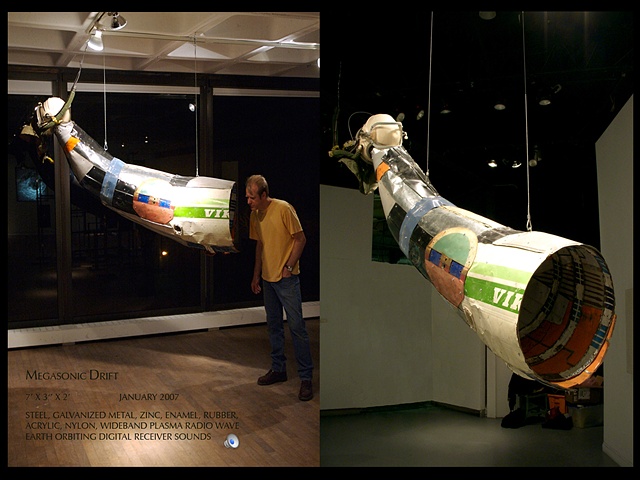 The body of the suspended megaphone is hammered from selected scrap metal with one end connected to a1960’s Russian cosmonaut helmet. A hidden speaker in the helmet emits a collection of digitally recorded sounds administered by the University of Iowa State Department of Physics and Astronomy’s Radio and Plasma Wave Research Group. The audible sound bites are captured from the study of naturally occurring radio and plasma waves in space plasmas. The group has provided radio and plasma wave receivers for more than 20 space missions. The sculptures intention was to mark a paradigm shift in translating the aural canvases of specific space zones. By “exposing” these rarified sounds of seemingly inconsequential moments from their native states of instability, I sought to imply both closure and the infinite. The work acts as a metaphor for re-contextualizing one’s notion of preservation as a composer being composed by the artificial elements of space. The installation was intended to serve as an incubator of sound originating from the intangible architecture of space, yet non-existent without the human ear to capture the space revealed within it’s source of outer silences.