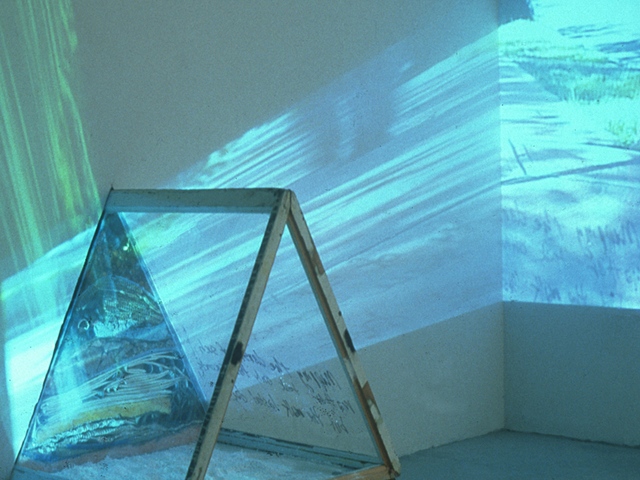 I consider creating art a vital source of mythmaking, bound in ambiguity, and subject to a range of forces that are not concerned with physical boundaries or limits. Devoid of any literal representation of the human body, my work often involves the viewer as collaborator. The interaction between body and environment, whether transgressive or progressive, relies on a complex system of interstitial relationships between evolutionary time, space, and ritual. I work through a process of deconstruction in order to redefine an object’s history through gradual layers of change over time. The process of experimentation is critical when developing the aesthetic resolve for a work to take shape and form. My aim is to balance and provoke a natural state of chaos with a cosmic state of compositional attraction.

The grid-autotelic, emblematic, and mythic, often appears as an underlying structure of my work, signifying the measure of value attributed to the history of an object. My conceptual interests take root in exploring the effects of human intervention within the study of environmental science, media studies, and phenomenology. Among these practices emerge systemic patterns of entropy. These discourses are eventually distilled into notions of human absence, dilemma, and cognition. My belief is that we all posses a symbiotic relationship with the fundamental principles of nature. Layer by layer, our identities can be reconstructed from environmental frameworks like that of an archeological excavation.

In the work I use quotidian objects such as detritus, industrial hardware, and mechanical apparatuses. The combination of ephemeral and transitory materials such as wax, heat, motion sensors, digital video, and sound to allow the sculptures to inscribe an indeterminate gesture with the phenomenology of time and space. I reinvent uses for these objects to set up a system of steps that often convey a heightened sense of interior vs. exterior, public vs. private, idealized vs. irrational, chaotic vs. ordered, and valued vs. devalued. Ideally these elements are instrumental markers that become self–reflexive, calling into question the idiosyncratic patterns of our social histories and interactions.