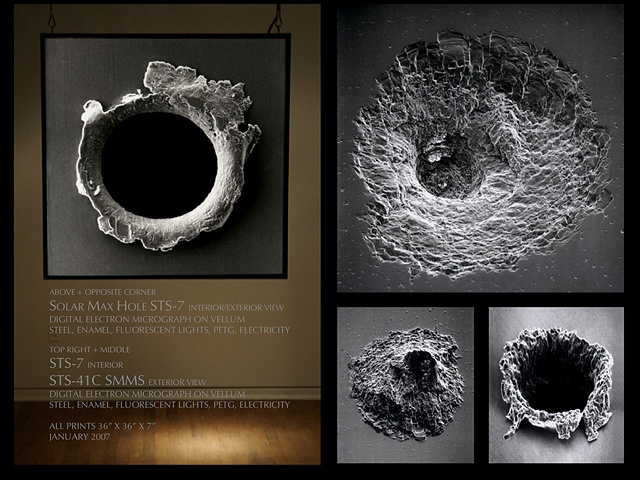 The original digitally scanned electron micrograph images were donated by NASA's Orbital Debris Program. Each were then printed on vellum and mounted on two sided light boxes. The top right image depicts a tiny 1mm pitted crater found in the window of the Space Shuttle Challenger following the STS-7 mission in June 1983. The pit contained titanium oxide which is a pigment used in spacecraft paint

The other images depict a scanned electron micrograph of craters found in louvers on the Solar Maximum Mission Satellite (SMMS) returned to Earth in April 1984 by the crew scientists at the Johnson Space Center (JSC). They comprised of six holes per square foot in the louvers, most of which were caused by hyper-velocity impacts caused by remnants of space trash, in this case traveling at more than 50,000 m.p.h. before impact.

I choice to blow up the actual size impact 1000 times original size. The center of each image is suspended at the same height of an average human being.