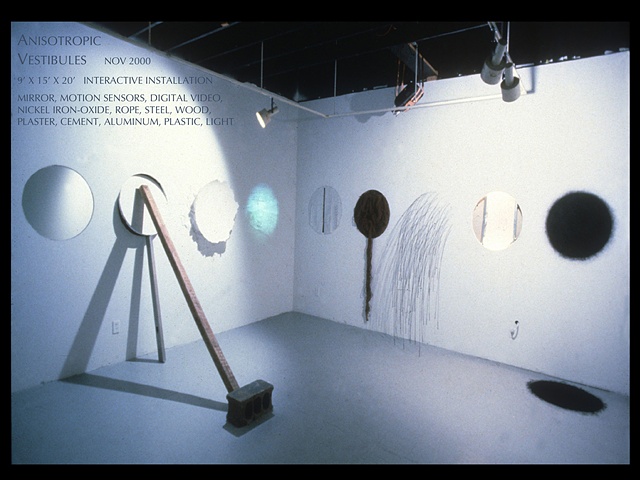 Materials used in this work were reconciled from Army surplus bunkers built during World War II in Eureka Missouri’s, now known as the Tyson Research Center. The Federal government acquired the land via eminent domain. Munitions and high explosives were once stored in the bunkers. My interest began by physically integrating the banal purity of these raw materials into the flesh of the architecture. Having no conception of what do, I locked myself in the gallery for three days without human contact. The self-deprivation drove me into a meditative bond with the material and physicality shared within the confines of the space. After analyzing the work, I realized the concentric voids served as various portals needed to psychologically penetrate beyond the confines of the space. Strategically placed at eye level, the circles literally penetrated the space at different axes. The additional use of unstable structural arrangements led to various struggles for transcendence to emerge. In this case, a theatrical escape aimed at the notion of "knowing" one's physical space was cloaked by the question, "Where does one void begin and one end?"