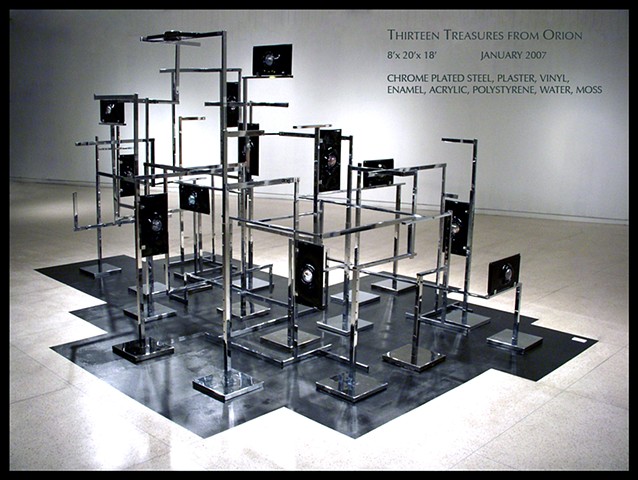 View from solo exhibition titled, “Final Frontiers: Orbital Flotsam and Trajectories". A series of works, which draws into question the paradoxical conditions found between material culture, virtual reality, and the solar system. The collision between man-made invention and the unforgiving nature of astrophysics.

During the past few decades the inexorable landscape of space has served as a colonized breeding ground for international satellites and proposed space stations. While NASA’s aim sharpens to make extra-terrestrial discoveries, they are perpetually obligated to avoid calamitous collision with over 400,000 man-made fragments of “space junk” orbiting the Earth on a daily basis. This indispensable predicament spawned my planetary interest regarding the authenticity, collection, and monetary value attributed to the surmounting political challenges and beliefs that govern such forms of transient waste floating in “space".

Void of any legitimate documentation and scale, the fictitiously encapsulated flotsam and jetsam was purported to have scathed atmospheric burn up during their descent back to earth. "Thirteen Treasures from Orion's Belt" was the end result, which would attract bids by Ebay’s obsessed space collectors for the duration of the exhibit.