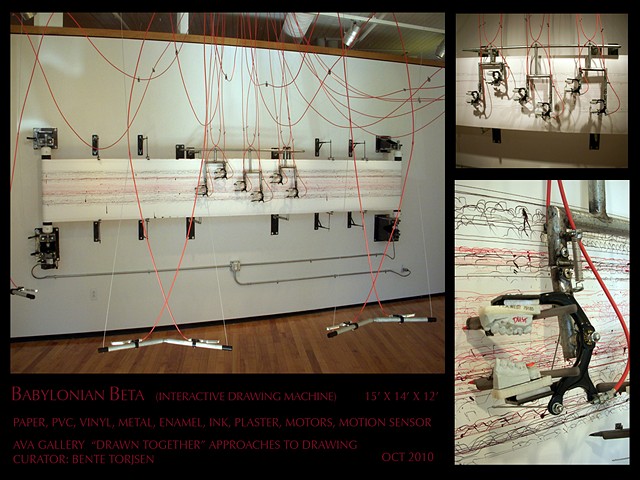 The interactive drawing machine was influenced by the, oral and written, mythological accounts of ancient history describing the origins of and diversity within human culture and language. One of the most well known accounts in the West is the destruction of the “Tower of Babel” from Genesis, the biblical passage that tells of God punishing humanity for arrogance and disobedience by means of the confusion of tongues. “Babel” is Hebrew for “mixed up, confused,” but Babylonian, a sister language to Hebrew, understands “Babel” to mean “The Gate of The God.” Catastrophic events, such as floods and natural disasters, are also recurring themes in the worldly myths of scattered language depicted by six cultural divides ranging from India, the Americas: Mesoamerica/ North America/ Amazonia, Europe, Africa, Southeast Asia and Oceania: Australia/Andaman Islands. Six viewers are invited to simultaneously “draw” upon a continuous 28’ loop of motorized scroll paper. Six horizontally spring loaded brake calipers are partially mounted off the paper with a dental impression of human teeth and two ink pens. The subsequent squeezing of each suspended hand lever, mounted on 25’ bicycle cables, directs each mouth piece to move up and down like that of a human jaw. The variable outcome thus creates visceral traces of linear abstractions of ink on the motioning paper. The diverse shades of custom mixed red ink are inherently symbolic to that of humankind's mystifying genealogical “blood line” and that of blood’s elemental cycle of decay. Sections of the scroll following de-installation become objects of art.