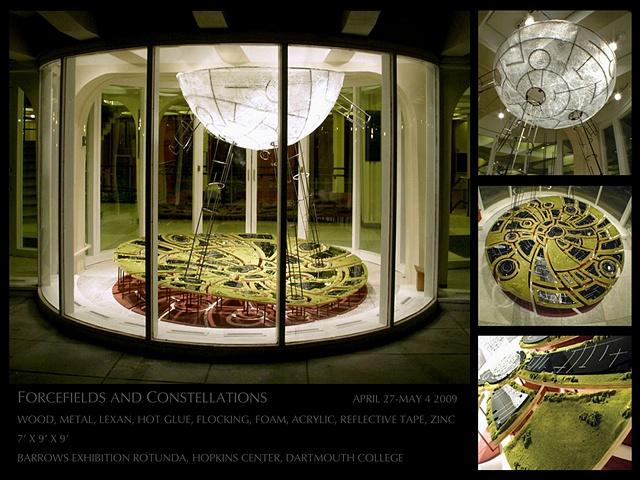 Inspiration for the work references the hypothetical study of helioseismology and cerealogy into a view of cosmic abstraction. The initial attraction to crop circles was not only for their rhythmic geometries, but by the metaphysical and theoretical discoveries behind those classified as “genuine”, non man-made formations. Field samples cross-examined by both NASA physicists and paranormal research analysts detected an anomaly of evidence common to each site. Discoveries ranged from short-lived radioactive isotopes in the soil to biophysical alterations in the crystalline structure of plant nodes slightly charred from the inside out. Comparative data by solar physicists ironically discovered that the sun is slowly directing pulsations of infrared heat and ultrasonic sound waves in the form of Archimedean spirals toward Earth’s surface every five minutes. Theorists believe these poles of ultrasonic sound waves sent during the peak of the Solar Sun Spot Cycle, measured in 2000, were responsible for generating the highly ornate tessellated patterns that appeared in non man-made crop circles the same year. These phenomenological occurrences are articulated into an artificial landscape fractured by patterns of light and form.